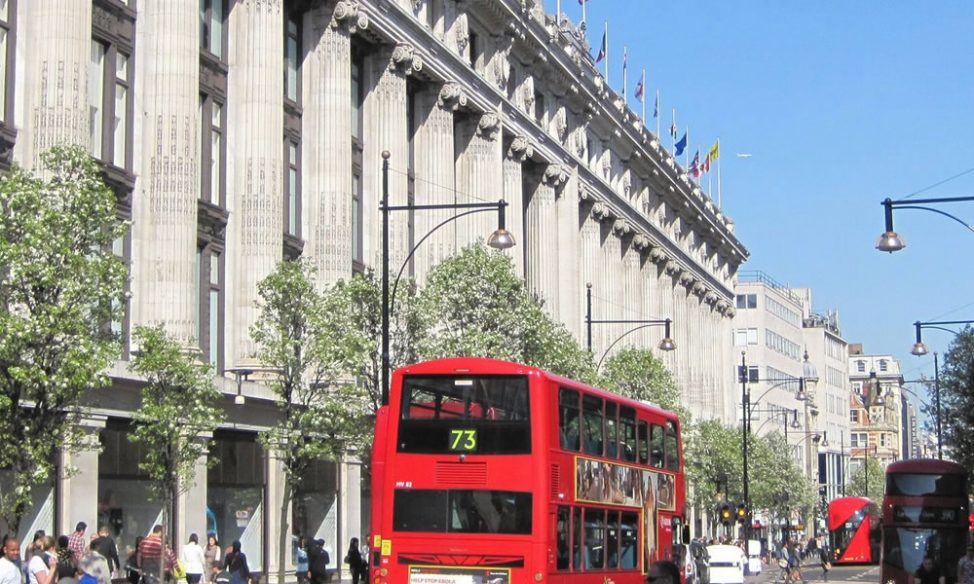 Oxford Street is located in the City of Westminster and is renowned as the busiest shopping street in Europe. Oxford Street is one and a half miles in length and is home to over 300 stores that include leading high street chains like Zara, Next and BHS, it also has a number of large department stores like Selfridges, John Lewis, House of Fraser and Debenhams.

Oxford Street was originally a Roman road linking the early Roman settlement at Colchester with the counties to the west. At one end is the busy shopping street, Tottenham Court Road whilst at the other end is Marble Arch, a grand landmark designed and built by Robert Nash in the 19th century.

As you would expect Oxford Street is a popular tourist destination and can get very busy. There is a real buzz about the area and it’s close to popular locations like Soho, Piccadilly, Mayfair and Edgware. At the middle of Oxford Street is Oxford Circus which is an imposing junction with Regents Street and one of London’s busiest Tube stations connecting the area to north and south London via the Victoria line and the City of London and Essex via the Central line.

Oxford Street is not just an excellent shopping destination. It’s also a thriving and busy business district with lots of media, business services and fashion companies making it their home.

You will find the following office options in the Oxford Street area:

The areas around Oxford Street are the home of hundreds of businesses and are popular with media companies like 20th Century Fox and Dolby Europe. There are also a number of fashion related companies and consultancy businesses in the area.

Oxford Street is a popular business location because of its proximity to the City of London and other popular areas of the West End like Covent Garden. With the opening of the new Crossrail station at Tottenham Court Road, European connections at St Pancras International and London City Airport will be just a few stops away on the Tube.

There are around 50 Serviced Office Centres within half a mile of Oxford Street and SO Advice can help you make the most informed choices.

“Oxford Street is at the heart of the West End and provides a central base for any business.” James Tatham

Oxford Street is close to a number of areas that may offer an alternative location for your business. We have selected several options that could be worth considering for your new office space.

Oxford Street: £500 – £950
Mayfair: £750 – £1200 A prestigious location in the heart of Central London, close to shops and well served by transport links.
Covent Garden: £600 – £900 Excellent transport links and close proximity to shops, cafes and restaurants make Covent Garden an excellent area for consideration.
St James: £750 – £1000 This area is famous for its proximity to excellent parks and for its prestigious business addresses like Pall Mall and St James Square.
Victoria: £550 – £800 With easy access via mainline or Underground stations, Victoria is a popular business area with great local amenities and things to do.

The area is serviced by several Tube lines making it easy to access the many amenities like the 100 Club, a popular live music venue. Soho is close by offering an eclectic mix of bars and restaurants and street entertainers. The British Museum and The Wallace Collection are local landmarks and both are worth a visit.

Just a short walk from the hectic pace of Oxford Street is the tranquil green space of Cavendish Square. It’s directly behind the John Lewis department store and provides an ideal location for lunch or time away from the office.