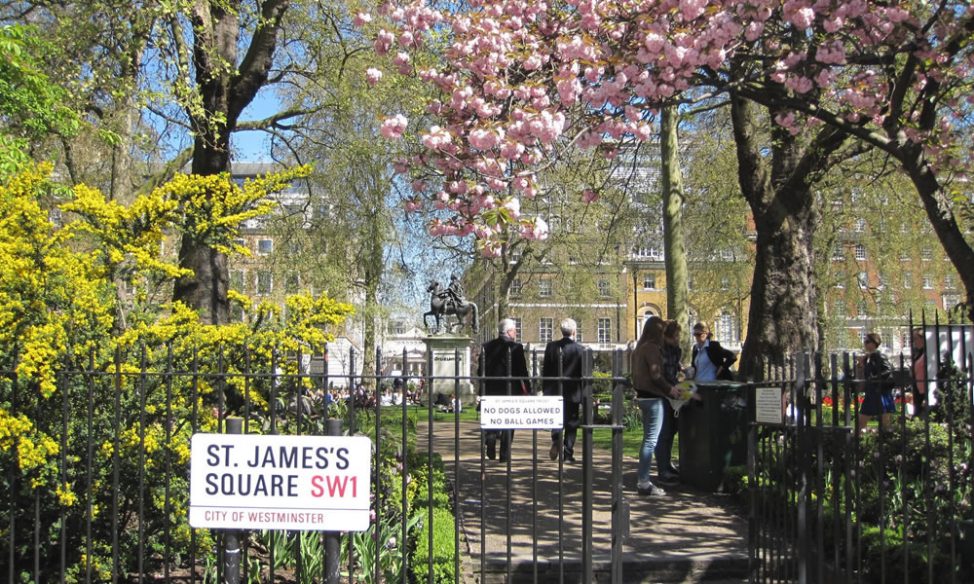 St James’s is an area in the southern part of the City of Westminster and is close to Mayfair and Soho and the busy shopping areas of Regent Street and Piccadilly. Originally a grand residential area dating from the 17th Century it slowly transformed a business area following the Second World War.

Renowned for its many gentlemen’s clubs, St James’s is also a popular tourist area with many historic landmarks like Admiralty Arch, Buckingham Palace and St James’s Palace.

There are many famous locations in the area like Pall Mall, the home to many private members clubs; the John Nash designed Carlton House Terrace and Jermyn Street, the home of British shirt making. St James’s Square is one of London’s famous garden squares surrounded by elegant terraces which are now mainly offices. A diverse mix of companies like, Bafta, The Economist and BP has their headquarters in St James’s.

As you would expect from a prestigious Central London location, St James’s has many excellent restaurants like Quaglino’s, Le Caprice, The Palm Court at The Ritz. The choice of food on offer is vast from Japanese and Thai to traditional British cuisine.

You will find the following office options in the St James’s area:

St James’s is a well known area of Central London, made famous by the many private members clubs and institutions that are located there. Like the Athenaeum, the British Academy, the Royal Society, the Royal Automobile Club and the Oxford and Cambridge Club. It’s also home to The Privy Council Office and The Institute for Government.

Many large corporate businesses have made the area their home like BAE Systems, Inchcape and Credit Suisse UK Limited. The area comprises predominantly period buildings, many of which have been refurbished and modernised behind a protected facade. The Crown Estate, which owns the freehold of much of Regent Street at the eastern end of St James’s, has created over 750,000 square feet of refurbished office space. St James’s Square has also seen many of the listed buildings refurbished to provide modern office space in a period setting.

There are around 50 Serviced Office Centres within half a mile of St James’s and SO Advice can help you make the most informed choices.

“St James’s provides a prestigious Central London location, close to the amenities of Mayfair and the West End.” James Tatham

St James’s is close to a number of areas that may offer an alternative location for your business. We have selected several options that could be worth considering for your new office space.

The area of St James’s is almost entirely surrounded by Green Park and St James’s Park on two sides, making this a particularly green and pleasant area of Central London. It’s also close to excellent shopping locations like Regents Street and is just a short Tube ride to Oxford Circus and the many stores and department stores of Oxford Street. However, just a short walk away you will find one of London’s oldest stores on Piccadilly. Fortnum and Mason was established in 1707 and holds a number of royal warrants for providing goods and services to Her Majesty The Queen and members of the royal family.

As with all Central London locations you can expect to find an impressive choice of cafes, bars and restaurants like Rowley’s on Jermyn Street and the Lyttleton an elegant British dining experience.

Tucked away on Carlton House Terrace is the beautiful landmark dedicated to Prince Frederick, Duke of York, the son of King George III. It was erected in 1832.