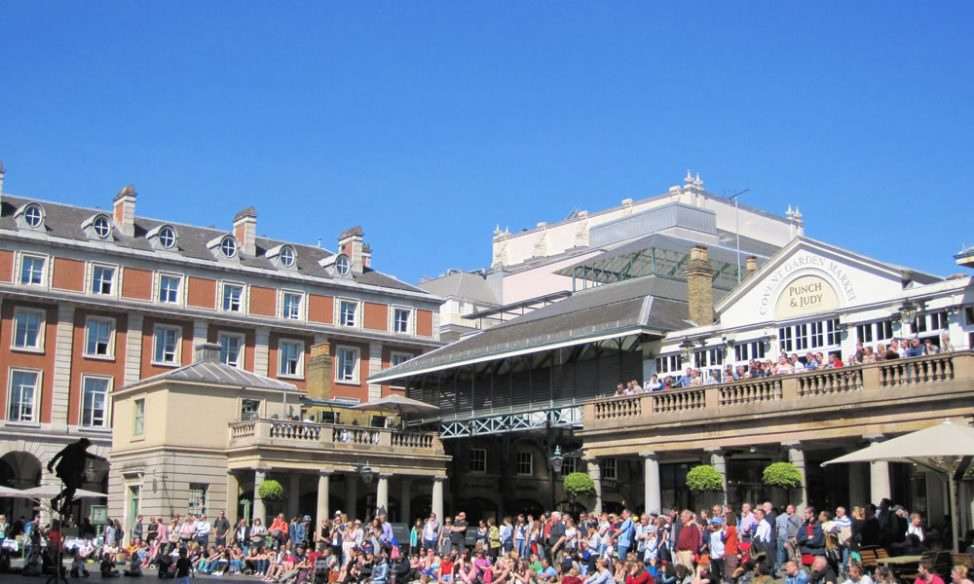 Covent Garden has been an important area of London since it was developed by Henry VIII and given to the Earls of Bedford. It’s a popular tourist location with people from all over the world attracted by the beautiful architecture and the many places of interest.

The area is home to a number of famous theatres like the Theatre Royal, The Lyceum and the popular Donmar Warehouse close to Seven Dials. The Royal Opera House is located here and was the first theatre with a royal warrant to perform plays. It dates from 1732 but has since been rebuilt twice, with the current building dating from 1858 and is now grade 1 listed. Street theatre is also a popular attraction with many performances in the square and in the surrounding streets.

The central area around the original market which dates from 1630 was the first modern square in London and designed by the architect Inigo Jones around 1830. It’s now home to a number of boutique stores, cafes, and high street retailers like the Disney Store, Karen Millen and Burberry.

The area provides a great location in Central London for easy access to the City of London, Westminster and the rest of the West End.

You will find the following office options in the Covent Garden area:

Covent Garden is an ideal base for any business. The area is popular with both SME’s and corporate businesses. There are several American companies like King, the makers of Candy Crush, and it boasts a number of high profile investment businesses like Plena Capital and Liontrust Asset Management, as well as a number of defence companies and even organisations like the Chartered Management Institute.

With planned development in the area set to take off in the next few years with over 500,000 square feet of new office space, retail stores and an extension to the market, the area will continue to be a popular destination benefiting from its central location and excellent transport links.

There are over 30 Centres within a half-mile radius of Covent Garden, and SO Advice can help you make the most informed choices.

“Covent Garden is popular with media and creative businesses and is close to shops and West End theatres.” Martin Halling

Covent Garden is close to a number of areas that may offer an alternative location for your business. We have selected several options that we think are worth considering for your new office space.

Covent Garden: £650 – £900
Mayfair: £750 – £1200 A prestigious location in the heart of Central London, close to shops and well served by transport links.
St James: £750 – £1000 This area is famous for its proximity to excellent parks and for its prestigious business addresses like Pall Mall and St James Square.
Oxford Street: £500 – £800 This world famous shopping destination is also home to many businesses in the media, fashion and business services sectors.
Victoria: £550 – £800 With easy access via mainline or Underground stations, Victoria is a popular business area with great local amenities and things to do.

Covent Garden provides a central location in the heart of London and is close to the many amenities of the West End. There is plenty to do in this popular tourist destination. From the many outstanding restaurants like Carluccio’s, Cote Brasserie and Raymond Blanc’s Brasserie Blanc, to popular chains like Pizza Express, Zizzi’s, Waggamama’s and Nando’s, you will never be stuck for choice in Covent Garden.

It’s a popular shopping destination too. Home to the largest Apple store in the world, there are also many interesting boutique stores offering everything from quirky fashion to home wares and gifts. If you are looking for something interesting to do you could pay a visit to the London Film Museum or the London Transport Museum.

Designed by the renowned architect Inigo Jones, St Paul’s Church is located on Bedford Street. It’s open to the public and has plenty of seating, providing a peaceful spot for a quiet lunch.